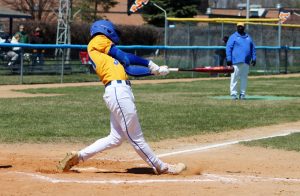 The Knights asserted their will over Edina on their way to a 8-1 victory over the Hornets. STMA got things started in the second inning. Jacob Dinkel’s sac fly scored one run for the Knights. STMA scored three runs in the fifth inning. The rally was led by a single by Eric Fouquette and a fielder’s choice by Dinkel.

Max Sutter was the winning pitcher for the Knights. Sutter went six innings, allowing one run on six hits, striking out eight and walking zero. Hayden Frank threw one inning in relief out of the bullpen. Matthew Maulik and Owen Neros led the Knights at the plate. Maulik was 2-4 with a single, home run, and RBI. Neros was 2-2 with two singles and two walks.

STMA improves their record to 9-0 overall and 6-0 in the Lake Conference. The Knights will travel to Chanhassen on Wednesday evening to battle the Storm.