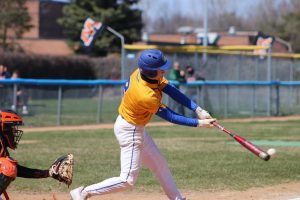 STMA defeated Minnetonka 6-0 on Friday as two pitchers combined to throw a shutout. Zach Romans made his first start on the mound and pitched six scoreless innings, allowing only two hits, and striking out three hitters. Hayden Frank came in to close the door in the seventh.

In the first inning, STMA got their offense started with a Hunter Palmer single and then stole second. Evan Saunders drove in Palmer with a double. The Knights scored their second run of the inning after a couple of walks and hit by pitch. Evan Saunder, Hunter Palmer, and Jack Denne combined for six hits on the night to lead STMA.

The victory improves the Knights’ record to 8-0 overall on the season and 5-0 in the Lake Conference. STMA will be back in action on Monday afternoon as they travel to Edina.