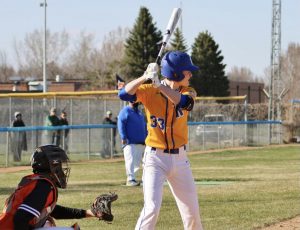 STMA defeated Buffalo 8-0 on Wednesday afternoon as Bryce Purrier and Hayden Olson combined to throw a shutout. Purrier pitched six scoreless innings, allowing only two hits, and striking out five hitters and picked up his second win on the mound.

The Knights were hitless through four innings, but it was Tyler Beckstrom who broke up the no-hitter in the top of the fifth. Hayden Olson then laid down a perfect sacrifice bunt single and Jacob Dinkel got both runners in scoring position with a sacrifice bunt. The big hit of the inning came off the bat of Owen Neros as he drove a triple to the left center gap to score both runners. Kaden Amundson followed up the fifth inning with a single scoring Neros.

The Knights opened up the game in the seventh with a grand slam by Eric Fouquette and a RBI triple by Beckstrom. With the victory, STMA improves to 7-0 overall on the season and 4-0 in the Lake Conference. The Knights will be back on the road on Friday evening as they travel to Minnetonka to battle the Skippers at 6:30.