Saturday the Knights Swim and Dive Team took on the toughest competition in the state after qualifying for the meet over the previous weekend. While the boys swam and dove well, the evening was not an easy one as the night kicked off at 6 pm. Diving took place during the swimming events and all the swimmers were asked to do fly over starts where the swimmers in the previous heat must stay in the water for the start of the next swimmer. The Knights had to be focused and ready to work with some of these differences and distractions which weren’t what they were used to. Yet the coaches were impressed by a number of their performances. Some highlights from this meet included Ezra Dickerson drop 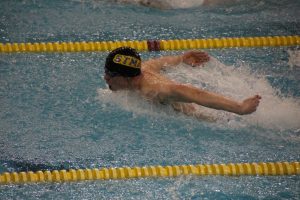 ping his season best time in the 200 Individual Medley swimming just a second off of his lifetime best which was previously swum at the MSHSL 2018 STATE MEET. Tristan Benson followed Dickerson’s excitement by moving up in placing and going his season best time in the 50 free along with Elijah Christenson placing 3rd overall in that same event. Divers held up some strong scores during the tough competition where Adam Konsor and Tyler Barrett placed top 16. Josh Dalluge slid into a higher placing for the 100 freestyle and was pleased to see his best time yet at 51.88. The evening wrapped up with the Knights swimming their best race of the night, the 400 Freestyle Relay. The team of Elijah Christenson, Nate Meyer, Ezra Dickerson and Jaden Herman bumped the Knight’s 400 Freestyle Relay into 7th place overall with a season best time for the team. Competition will resume this Tuesday at home starting at 6 pm. The JV Swimmers and Divers will compete in their championship this coming Friday at 5 pm in Becker.

No Events This Week

Events are added by athletic staff.
View All Events